JOURNAL OF “IRRIGATION AND MELIORATION”

INTRODUCTION OF AUTOMATED LOCAL ACCOUNTING SYSTEM MODELBUILDER A.N. Inamov - аssociate professor, O.S. Abdisamatov - independent researcher Tashkent Institute of Irrigation and Agricultural Mechanization Engineers
In the world computer industry, previously developed programs are being improved, and in our country, along with the developed countries of the world, there is a gradual transition to work on the basis of modern programs. ArcGIS software products based on the latest computer technologies meet all open standards, which allows them to be used in many practical areas and at different levels of work organization (individual, server and mobile). Key words. Modelbuilder, ArcGIS software, Data base.

FOOD SECURITY RISKS AND THE COVID-19 PANDEMIC IN THE REPUBLIC OF UZBEKISTAN. M.R. Li, A. Etenesh, I. Rudenko, F. Saydullaeva
The article substantiates the importance of research on food security risks. The impact of the COVID-19 pandemic on this issue is considered, the level of food security of the urban population during the pandemic is analyzed. The existing risks that form food security threats are identified and proposals for their elimination are developed. Key words: risks, food security, COVID-19, threats, proposals, agro-industrial complex.

THE PATTERNS AND EXTENT OF CROP DIVERSIFICATION: EVIDENCE FROM DIFFERENT AGRO-ECOLOGICAL REGIONS OF UZBEKISTAN. A.E. Primov - PhD student, Tashkent State Agrarian University
In Uzbekistan, land is more appropriate for cultivating fruits and vegetables. Since independence, the government of Uzbekistan has implemented a number of agricultural policies such as making some crucial structural reforms at the farms, comprising different institutions and enhancing diversification of agricultural production in order to stabilize on agricultural sector of the country. Therefore, crop diversity has an important role in sustainable agriculture. The main objective of the study is to analyze the degree and extent of crop diversification among farmers. We calculated the diversification index based on the Simpson Diversity Index method. The study revealed the mean computed Simpson Index values indicate that diversity index was found 0.59, 0.45, 0.56 and 0.62 for Andijan, Karakalpakstan, Kashkadarya and Tashkent regions, respectively. This implies that Tashkent region farmers shifted towards more diversification cropping patterns than other counterparts of the country. The overall result in the four states combined in this study reveals a mean Simpson Index within the sample of farmers was 0.56. This suggests that the farmers in the study areas were not too diversified in their cropping pattern. While cultivating several crop species also helps the farmers to manage both price and production risks which attains more food options for the household and income through marketing the produce from the surpluses. Key words: Crop diversification, Simpson Diversification Index, Cropping patterns, Uzbekistan.

MAIN DIRECTIONS FOR DEVELOPING FOOD SECURITY. Sh.M. Murodov - PhD at the department of Economics Tashkent Institute of Irrigation and Agricultural Mechanization Engineers
Socio-economic and political processes and realities taking place in the world that pose a threat to it are the main factors that threaten food security in countries. This is reflected in the emergence of global economic, financial, agrarian crises, a reduction in international food markets and an increase in prices for them, on the one hand, and in the persistence of a trend towards a decrease in acreage of agricultural crops in the context of an increase in the world population and an intensification of the urbanization process, on the other. An increase in the production of dangerous products as a result of the widespread use of various antibiotics, hormones and similar components harmful to human health in the process of food production in order to generate high incomes on the world market in the context of global warming, globalization of the economy, the spread of plant pests and various dangerous viruses still further aggravates the problem. Key words: agrarian policy, agro-industrial complex, agrarian food sector, food security doctrine, food, food security, forecast, population, supply directions, agricultural products, strategy. OPPORTUNITIES FOR PUBLIC-PRIVATE PARTNERSHIPS IN THE FIELD OF AQUACULTURE G.D. Dusmuratov - c.e.s., associate professor, I.O. Yunusov - PhD, associate professor Tashkent Institute of Irrigation and Agricultural Mechanization Engineers
The problems and solutions of the introduction of public-private partnership (PPP) mechanisms in the aquaculture sector are considered. Based on the analyzed experience of foreign countries and Russia, it was concluded that it is necessary to create a fishery cluster for the implementation of PPP projects by joint efforts. In addition, recommendations for the most effective implementation of PPP mechanisms were given. Key words: public-private partnership, aquaculture, small business, fishery complex, large enterprises, regional cluster.

EXPERIENCES ON WATERMELON AND MELON CULTIVATION AND THEIR EXPORT: IN CASE OF SPAIN. U.Z.Alimov - PhD student Tashkent Institute of Irrigation and Agricultural Mechanization Engineers
The article analyzes the growth and export of olericultural products in Spain. It is possible to get acquainted with the problems faced by growers in the cultivation of olericultural products and get information about the general state of the industry. Some of the best practices in the Spanish olericultural industry have been recommended for use in Uzbekistan. Key words: olericulture, irrigated agriculture, organic products, climate change, drought, exports, digital marketing. DEVELOPMENT CHALLENGES OF FRUIT AND VEGETABLE SECTOR OF UZBEKISTAN. S.T. Iskandarov - PhD, Andijan Institute of Agriculture and agrotechnologies, Uzbekistan
This article presents development challenges of vegetable and fruit production sector in Uzbekistan. The governmental sector reforms, labour resources, price formation, import and export activities have been the object of the study in this article. The paper reviews several problems with developed support system and further development of fruit and vegetable production in Uzbekistan. The paper is aimed to describe the main problems and challenges and suggest their possible solutions. Key words: Vegetable and fruit production, labor resources, price formation, import and export activities.

TEACHING METHODS AND WAYS OF DEVELOPING COMMUNICATIVE COMPETENCES OF STUDENTS S.T.Kalandarova - PhD, TIIAME, O.A.Kulmamatov-senior teacher, Tashkent Institute of Architecture and Civil Engineering
In this article, issues of developing language proficiency through interactions embedded in meaningful contexts are considered. This approach to teaching provides authentic opportunities for learning that go beyond repetition and memorization of grammatical patterns in isolation. The fact that psycho-pedagogical and psycholinguistic message calls speech production skills in language teaching methods qualify as speech skills. Their methodical in tradition can be divided into regulatory and communication skills. A central concept of the communicative approach to language teaching is communicative competence: the learner’s ability to understand and use language appropriately to communicate in authentic (rather than simulated) social and school environments. Therefore, this article is devoted to reveal the mechanism of interdependence and relationships between the elements of the triad language – thinking – speech, the use of the term speech production skills in methods of teaching the English language. Key words: communicative competence, types of speech, interpret, language material, knowledge gap, problem-solving, socialization, proficiency, sketches, psycholinguistic, production skills, communication.

HYDROCHEMICAL CHARACTERISTICS AND MACROPHYTES IN THE BETANA LAKE, EASTERN NEPAL.
Aquatic ecosystems provide a variety of goods and services and thus highly valuable for the livelihoods of people and sustainable development. This study aims to examine hydrochemical variables and macrophytes in one of the important wetlands in eastern Nepal ‘Betana Lake’. Water samples were collected in pre-monsoon and post-monsoon seasons and water temperature, pH, dissolved oxygen (DO), free CO2, and major ions including total hardness were analyzed to characterize the water quality of the lake. In addition, macrophytes found in the lake were also collected and identified. The results exhibited that the dominance order of chemical variables in terms of mean values (mg/ L) in the Betana Lake were Cl- > TA > NH4+ > PO43- >NO3 - , and TA > Cl- > NH4+ > NO3- > PO43- during the pre-monsoon and post-monsoon seasons, respectively with relatively higher concentrations of NH4+ and NO3- in post monsoon season. The low pH, alkalinity, and high value of dissolved oxygen (DO) in the post-monsoon season in the lake were related to the lower dominancy of submerged and floating macrophytes. In the lake, altogether 42 species of macrophytes (emergent, submerged, free-floating, and rooted) were reported. An invasive species Eichhornia crassipes, submerged Hydrilla verticillata and Ceretophyllum submersum were the ecologically significant macrophytes in the lake. The abundance of these species with other submerged and floating species in the lake is due to eutrophication, high silt load and sedimentation, and human encroachment. The higher dominancy of emergent macrophytes in the post-monsoon season indicated that higher nutrients content (PO43-, NO3-, and NH4+) and total dissolved solids (TDS). Due to the promotion of the lake site as an eco-touristic area, anthropic activities could further deteriorate the lake water quality and biodiversity. Therefore, periodic evaluations of hydrochemical parameters with macrophytes are required for the maintenance and long-term protection of the Betana wetland. Key words: Hydrochemical parameter, Macrophytes, wetland conservation, water quality, Betana Lake.

A REVIEW OF CLIMATE CHANGE IMPACTS ON WHEAT CROP IN UZBEKISTAN. M.M. Babadjanova - PhD student, Tashkent State Agrarian University
Starting from the early years of the Post-Soviet Union, wheat is considered one of the major crops in Central Asia, being a central point of many policy discussions. Wheat was the second crop occupied agricultural land which is the most important cereal crop. Recent years have witnessed growing negative climate variability that has impacted agricultural production by effecting soil fertility, water scarcity, or causing wheat diseases. The goal of this paper is to examine by reviewing the recent literature related to the impact of climate variability on wheat production in Central Asia. Different agronomic and economic methodology, also, approaches used to analyze Climate Change’s negative impacts. The review results show that there are adaptive recommendations by researchers. Agricultural policy actions are one of the main leaders to enhance adaption and mitigation. Also, continuing agricultural researches could be key for opening new doors of solutions. Key words: Agriculture, winter wheat, productivity, climate change

HEXAVALENT CHROMIUM REMOVAL FROM AQUEOUS SOLUTION AND NATURAL ATTENUATION IN SOIL BY ADSORPTION. S.Musayev - Department of Civil and Environmental Engineering, University of Connecticut, Storrs, CT, USA I.Musaev - TIIAME
Rapid industrialization and population growth bring forward to use heavy metals in the environment and food chain. Discharge of untreated or partially treated wastewater having these toxic metals even cause more problems to water bodies and human health. Distribution of adsorbate molecules between the solid and liquid at equilibrium can be studied by adsorption isotherm models (Tella et al., 2014). Equilibrium is when concentration of adsorbate in solution is in balance with on the liquid adsorbate interface. The results show that Cr(VI) removal rate increased with adsorbent dosage till it reached equilibrium. Contact time also indicate efficiency within 60 to 70 minutes. Under certain conditions chromium hexavalent can be reduced to less toxic states in the soil by natural attenuation. Relying on this natural attenuation chromium contaminated sites can be remediated with less expense. If this method is applied, then what natural reductants are available within the aquifer should also be thoroughly studied. Reducing capacity should not prevail oxidation capacity. To study Cr (VI) reducing capacity of the aquifer by mass balances when relying on the aqueous concentrations from monitoring wells, the network must be sufficiently dense to estimate the correct Cr(VI). Key words: Natural attenuation, food chain, heavy metals, toxic metals, adsorbent dose, adsorption isotherm, groundwater and soils.

ASSESSMENT OF WATER CONTENT IN HYDROLOGIC TIME SERIES BY USING DIFFERENCE INTEGRAL CURVES (IN THE EXAMPLE OF PSKEM RIVER). S.M.Kodirov, S.R. Mansurov Tashkent institute of Irrigation and Agricultural Mechanization Engineers, Tashkent, Uzbekistan
The Pskem River (mean annual flow rate 79.6 m3/s) is one of the biggest tributaries of The Chirchik River. The Chirchik River is the biggest right tributary of The Sirdarya River in the territory of Uzbekistan. On the basis of long-term data from hydrological and station (The Pskem River, at hydrological station Mullala, 85 years of observation), long-term fluctuations was evaluated in terms of watery of the year i.e. how changes mean annual flow rate from year to year. The data set of statistical characteristics and their standard errors are estimated, for average flow rates statistical error does not exceed 2.5 %, for the coefficient of variation; the error does not exceed 6 %. To describe long-term fluctuations in water content for a given period method of normalized values appied. Key words: The Pskem River, The Chirchik River, hydrology, long-term fluctuations, average flow rate. 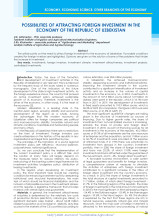